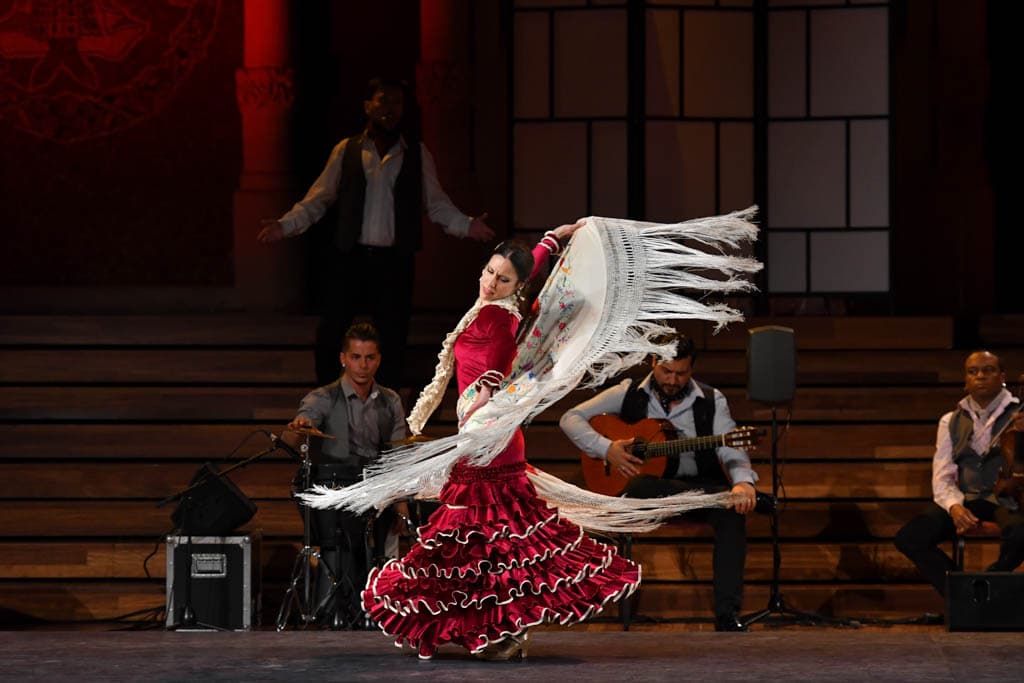 How to choose the best flamenco show in Barcelona?

Barcelona y Flamenco. One of the best flamenco’s show options in Barcelona. You can not miss it

How to choose the best flamenco show in Barcelona?

Barcelona is one of the most visited tourist destinations in the world, partly due to its wide range of entertainment options. Among all of them, flamenco shows in Barcelona take one of the first places due to its colorful appearance. However, this vertiginous increase in flamenco shows in Barcelona has resulted in of many of them not being adequate, so it is important to know which of them all are really desirable. Without a doubt, the best option to enjoy high quality artistic flamenco is “Barcelona y Flamenco”, a company that has the TripAdvisor Certificate of Excellence and whose musical director is none other than the great Juan Gómez “Chicuelo”, winner of a Goya for its central theme in the film Snow White.

What is and why was born “Barcelona y Flamenco”?

Talk about them is talking about one of the best dance companies in Barcelona, ​​with more than 15 years of experience in performances. His shows are focused on flamenco, but not just any flamenco, but one of a high quality. His shows, presented in some of the most important theaters in the city of Barcelona, ​​combine tradition and modernity perfectly.

The irruption of the company in the city has been meteoric. His two main shows, called “Opera y Flamenco” and “Gran Gala Flamenco” have filled each and every one of the shows they have performed, with an audience that already exceeds three million viewers. According to the attendance data, these two shows are among the most watched of all those present in Barcelona.

After these two successful shows, the prestigious company launched its third show in 2017, called “Guitarra y Flamenco”, making a beautiful and special tribute to one of the most characteristic instruments of Spanish culture: the guitar.

At the head of the company is the great Juan Gómez “Chicuelo”, musical director and also guitarist in “Opera y Flamenco” and in “Gran Gala Flamenco”. Anyone who knows the world of Flamenco in Barcelona will know that “Chicuelo” is one of the most relevant guitarists of this style, in addition to having numerous and interesting compositions along with some of the best Spanish artists.

His shows: a real delight for the senses

The famous performance “Opera y Flamenco”, with the presence of the tenor Óscar Marín, one of the best in the Spanish music scene, tells a stormy story of love and hate among the dancers performed by their own souls: the singers. In it you will enjoy sensual choreography alternated with some of the most famous opera arias, such as “Il Trovatore” by Giuseppe Verdi, “Carmen” by G. Bizet or “Tosca” and “La Bohème” of the great Puccini. In the work a careful aesthetic beauty is mixed together with a Flamenco combined with lyric.

A flamenco show in Barcelona at Palau de la Musica Catalana. At the stage tow couples: soprano and tenor, and a flamenco male dancer with a flamenco female dancer.

In Gran Gala Flamenco you will feel the passion and strength of the gypsy people over time through a tour of the types, also called “palos” (“sticks”), of flamenco. The bulería, embodying a festive and cheerful atmosphere, la solea, with its solemn and intense aspect or la alegría, with its marked dynamic and developed character. Palos such as tango, guajira or farruca will also be present in this beautiful show. In “Gran Gala Flamenco” the new and magnificent Catalan generation of flamenco artists take the stage, making the idyllic union between soul and heart, dance and music, rhythm and passion available to the spectator. From the heart of Spain to the World. That is “Gran Gala Flamenco”. You can not miss it.

“Guitarra y Flamenco” is a beautiful flamenco show in Barcelona that pays tribute, more than deserved, to the spanish guitar and dance. Through an intimate style, designed with the aim of enveloping the public with a delicacy, warmth and rhythms matchless, the flamenco guitar shows its powerful strength combined with the unparalleled sensuality of the Spanish dance. In it you can enjoy the most famous pieces of renowned Spanish artists. Go to this show and you will make a trip with the best flamenco artists in Barcelona and the best guitarists. Enjoy this unique flamenco concert in Barcelona and you will be speechless.

In which theaters can you enjoy the shows?

The magnificent Palau de la Música Catalana is the only modernist concert hall in the world that has been declared a World Heritage Site by the Unesco. At the moment it is an inexcusable meeting point between the cultural and social life of the city of Barcelona, ​​in addition to being an immense both symbolic and sentimental heritage of all the people of Barcelona, ​​since through it much of the city’s history is visible. For all of this, in it you can enjoy a magnificent flamenco show in Barcelona.

Opened in 1906, the Teatre Poliorama was built inside the building of the Royal Academy of Sciences and Arts of Barcelona. It is located in the heart of the city, on Las Ramblas, one of the best known streets in the world. His role in the cultural history of the Catalan city has been crucial, and that explains why it is one of the places chosen by the company to present its prestigious flamenco shows to the public in Barcelona.

Barcelona y Flamenco. One of the best flamenco’s show options in Barcelona. You can not miss it.