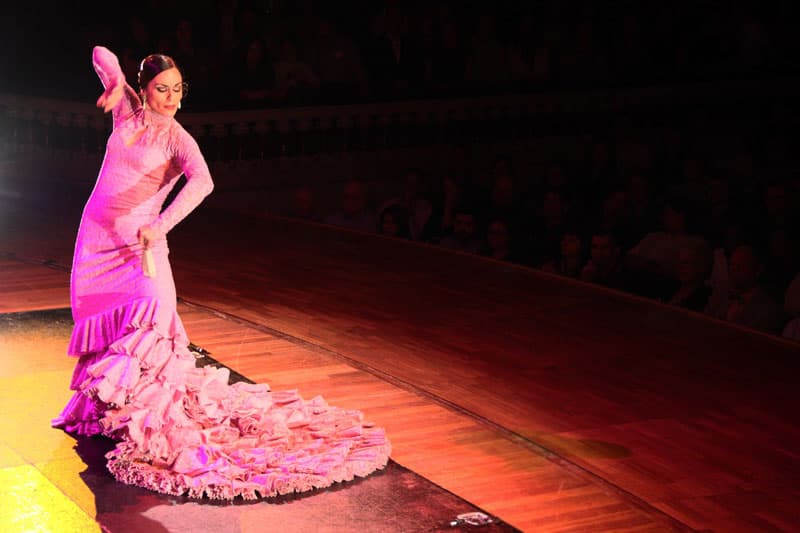 What is a Spanish flamenco dress?

The Spanish flamenco dress is traditionally worn by female flamenco dancers during their performances. The movement of its majestic ruffles is said to constitute one of the most emblematic images of modern flamenco dance. So, without further ado, let’s dive into the history of this iconic garment and its significance within the world of flamenco.

The dress dates back to the mid-18th century and comprises a skirt or dress that extends into a long train of ruffles and pleats. It’s thrown into flight through a combination of dizzying turns and sharp movements by the female dancer and is often combined with “zapateo” (foot stomping) and other traditional flamenco props, including shawls and fans.
And yet, it was not originally associated with the world of flamenco. These somewhat flamboyant costumes were initially worn by high society women in the form of a dress with a round neckline, three-quarter sleeves, and a sweeping train. It wasn’t until the heyday of the “cafés cantantes” (singing cafes) in Granada that they became popular with “bailaoras“. It’s believed that they were used to add a touch of magic to their performances. 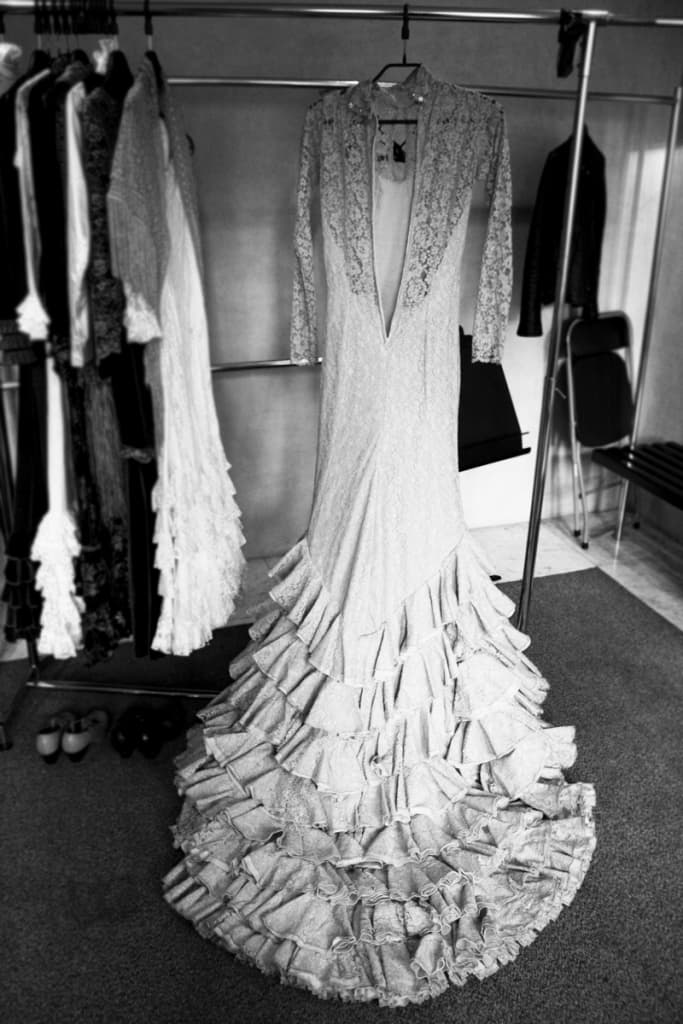 What is danced with a Spanish flamenco dress

The use of the Spanish flamenco dress requires a combination of grace, technique and physical strength so that the dancer’s movement is fluid. Traditionally, this garment is used in more classical flamenco styles, such as seguiriyas, soleá or alegrías, although there are other musical genres that make use of the garment, such as the copla.

As we have already explained, handling the flamenco dress is far from simple. On the contrary, it requires a near-perfect understanding of the tempo of the dance and an ability to execute the moves with a certain grace, which include turns in the air on just one leg, and having sufficient strength and physical preparation, since it is fairly heavy. 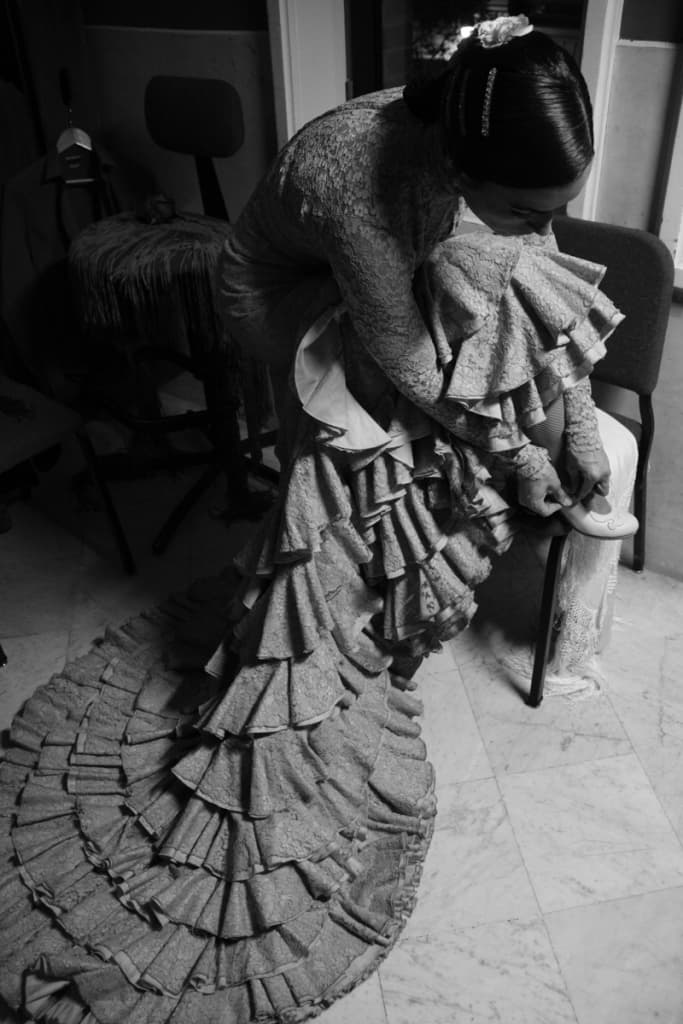 Famous dancers who have worn the Spanish flamenco dress

Throughout its history, innumerable “bailaoras” have worn flamenco dresses and paraded their art with great femininity and harmony. These include Carmen Amaya, Rosa Durán, Cristina Hoyos, Carmen Mora, Matilde Coral, Rosario Monje «La Mejorana», Juana Vargas «La Macarrona» and those who are considered precursors of the garment, Antonia Mercé and Pastora Imperio.

Colors and fabrics used in the making of the dress

Traditionally, Spanish flamenco dresses were sewn in starched fabrics, such as organdie, nylon and other fabrics that simulate paper. However, these days it is more common to use poplin, silk knit or organza. Thanks to this, it has been possible to reduce the weight of the garment, which today weighs around 10 kilos.
It’s now also possible to find these dresses in a variety of colors, from classic white or pastel to stronger tones, such as red or black, through to very bright shades, such as blue or purple. When choosing a flamenco dress, it is important to take into account the dance itself. For example, a livelier rhythm, such as alegrías, is not the same as a more solemn style, such as soleá, although a correct choice of colors will allow you to use the same dress for a multitude of dances.

How long is the Spanish flamenco dress?

The dress is usually between 50 centimeters and one meter in length, which is about a meter and a half from the waist. However, this depends on aspects such as the dancer’s height and her skill in handling the trains. Carmen Amaya handled dresses of up to 3 meters long with unparalleled power and grace.

How much do these dresses weigh?

As we have already mentioned, the fabric with which the garment is made is responsible for its weight. Although traditionally they could weigh up to 25 kilos, with all the difficulties that this added to its handling, the fabrics with which it is made today have succeeded in reducing their weight to approximately 10 kilos. That said, it is possible to find examples (especially semi-professional, designed for rehearsals) of between 3.5 and 4 kilos.