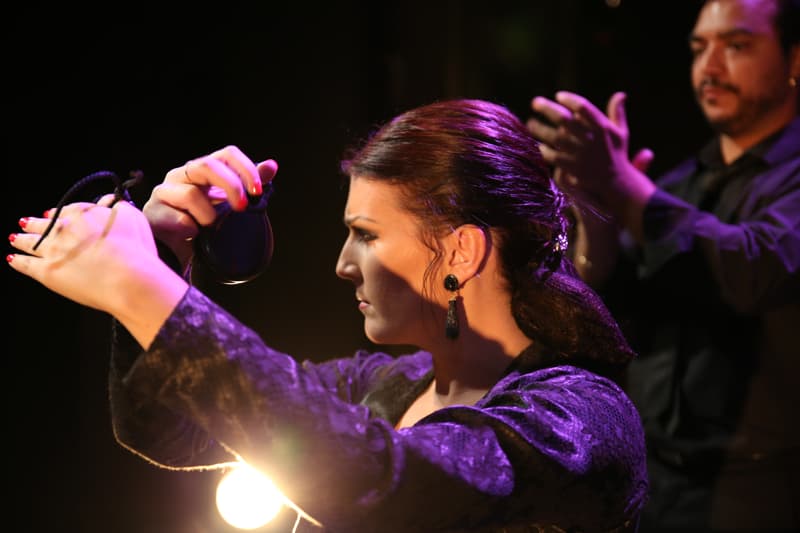 Castanets and tradition go hand in hand.  These days, everyone recognizes them as a percussion instrument representative of Spanish flamenco music, but the history of the castanets dates back to the Phoenicians, during which time they were linked to classical music.

The Origin and History of the Castanets

Did you know that there is a dispute regarding who invented the castanets? Some say it was the Egyptians, while others say it was the Phoenicians. Let’s unravel this mystery.

Who invented the castanets?

The invention of the castanets dates back more than 3,000 years and is attributed to the Phoenicians. They were the ones who created the first castanets using everyday wood, and thanks to trade they became popular in several Mediterranean countries, including Croatia or Italy.

However, it was Spain that welcomed the castanets into its culture, giving them the place and importance that they have today, particularly in flamenco music.

Where are Castanets Used?

Although we directly relate the use of castanets to flamenco and tradition, their use is not limited to this type of music alone. This percussion instrument, which has a very distinguishable sound, serves as the base for many other musical genres.

Long before being used in flamenco, castanets had already earned their place in classical music scene. Santiago de Murcia, one of the most important Spanish guitarists and composers of the baroque period, composed satirical interludes called “jácaras” in which the castanets played a fundamental role.

De Murcia used a variation compositional technique in which a theme was repeated throughout the work, with a slight change each time. Thus, he managed to create interesting fandangos in 1730 where the classical guitar and, of course, the castanets stood out.

Boccherini, a composer and cellist of Italian origin, composed a piece for the infante Luis Borbón y Farnesio in 1798 in which the castanets played a leading role.

Richard Wagner, a German composer, also produced an opera called Tannhauser in around 1845, where the sound of the castanets in Venusberg can be appreciated.

In the twentieth century, the composer and maestro Joaquín Rodrigo composed his work Dos Danzas Españolas para Lucero Tena (Two Spanish Dances for Lucero Tena). These pieces were created for castanets and orchestras, and premiered at the Pérez Galdós Theater in 1966.

Castanets In The Movies

The castanets have not only been part of classical music, but have also appeared on the big screen. If we look back to  the 30’s, when cinema was still in black and white and sound wasn’t the main protagonist., we can appreciate the presence of this instrument.

One of the most remarkable early appearances of the castanets is due to Carmen Amaya, a renowned flamenco dancer who appeared playing the castanets in a sequence of the film La hija de Juan Simón (1935).

Since, the presence of castanets has been constant in various film productions, where Spanish folklore is present, such as in Canelita en rama (1942), or in Los amores de un torero (1945).

Although castanets are a landmark within flamenco, they are also often used in other Spanish folkloric expressions. In fact, castanets are also part of the expression of folklore in Portugal and other Latin American countries.

But how did the castanets go from being just a musical instrument to being the instrument that accompanies a flamenco dancer?

In the mid 19th century, the Escuela de Bolera de Baile was created, where the best dancers were prepared to be presented in Spanish theaters and travel around Europe, especially Paris, France.

The main attraction of this school was undoubtedly the use of the castanets as an accompaniment to the dance which centered on the movement of the arms. This technique is not unique to the Escuela Bolera, but also belongs to flamenco and is part of the similarities shared by both scenic expressions.

Finally, castanets are a key accompaniment in dance and in the rhythmic structure of various musical compositions, being one of the most interesting and ancient percussion instruments that have survived the test of time to become the symbol of an entire culture and mainly of Flamenco in Spain.

Now that we know the origin of the castanets, it’s time to find out how many different types exist. Not all castanets are the same and this difference is due, above all, to the type of material from which they are made.

How many types of castanets are there?

Generally speaking, there are 4 types of castanets, these can be classified according to the type of material used to manufacture them, their shape and use.

They are the used for dance and flamenco professionals, made of wood and held by hand through a cord.

In terms of aesthetics, hand castanets may or may not have a beak. The beak is a relief in the form of an angle on the bridge of the castanets, those that don’t have a beak have a completely smooth surface.

These castanets are the most economical, since they are made of plastic and are usually used by beginners or children, being the best option to start playing the castanets.

Base castanets are often used in symphony orchestras. These are placed on a panel or board to keep them in a horizontal position, which facilitates their use during performances.

Also known as palilleras, the handle castanets are characterized by having an elongated handle that holds the two castanets simultaneously. Like the base castanets, they are usually intended for folklore groups or orchestras.

The castanets have 5 parts:

Frequently asked Questions on the History of Castanets

Why are they called castanets?

The name of the castanet comes from the Latin word castanea, that is, chestnut, which would make sense because of the similar color and shape between chestnuts and castanets.

What type of instrument are castanets?

The castanets are a percussion instrument composed of two pieces; male and female, where the female has the higher pitch.

What is the Name of the person who plays the castanets?

Close Menu
X
We use cookies to ensure that we provide the best user experience on our website. If you continue to use this site we will assume that you agree.OkPrivacy policy